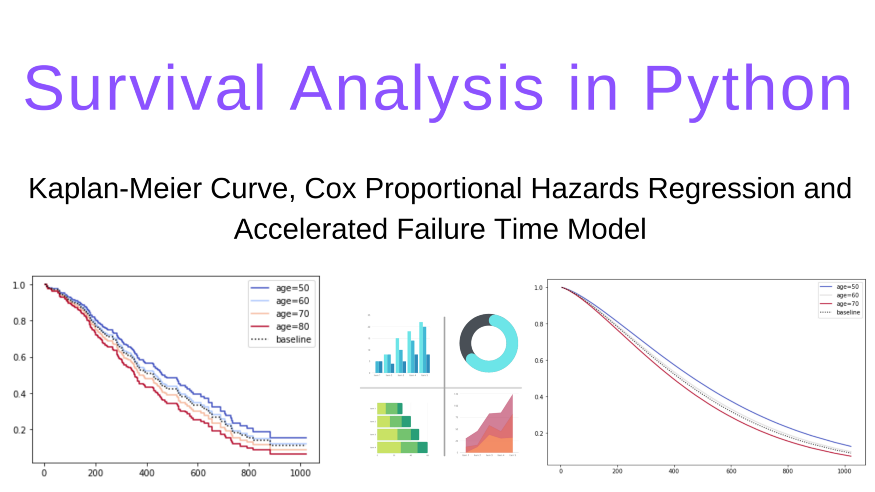 Survival analysis is a branch of statistics for analysing the expected duration of time until one or more events occur. The method is also known as duration analysis or duration modelling, time-to-event analysis, reliability analysis and event history analysis.

The survival analysis is used to analyse following questions:

The survival analysis is used in various field of research:

Aim of the article

The aim of the article is to understand the survival of lung cancer patents using time to event analysis.

First, we need to install and load the following libraries to start with the survival analysis.

Next is to get an idea about the lung cancer data that we are going to use for the analysis. The data is originally available in R programming language (in survival library) [1]. So, I have downloaded it from R to use it for learning purpose. The data source is mentioned below.

The data consist of 228 observations and 10 variables/columns. The variable description is presented as the following:

First, let’s read the lung.csv data from our local storage and store in data object. We can print the first five observations using the head( ) function.

Next, let’s check the shape of the data using .shape attribute. The data consist of 228 observations and 10 variables/columns.

The status and sex are categorical data. The status consists of 1: censored and 2: dead; while, sex consist of 1: Male and 2 :Female. We can keep it like that, but I usually prefer the base label for categorical variable as 0 (zero). Thus, to make the base label 0 we need to deduct 1 from the variables.

Now, let’s check the data type. Time, status, age, and sex are of integer64 type while ph.ecog, ph.karno, meal.cal and wt.loss are of float64 type.

The next important step is to check whether the variables contain missing values. We can check that using .isnull( ) method and by applying the .sum( ) over it. The resulting table illustrates the following:

One-way to deal with missing values is to remove it entirely, but this will reduce the sample when you have already a small sample size. Next method would be to impute missing values with mean/median or with a particular value.

Instead of deleting missing observations here, I have imputed them (i.e., ph.karno, pat.karno, meal.cal and wt.loss) with the mean of the column as it is for demonstration purpose. Next, I removed the NA value of ph.ecog (a categorical column) using .dropna( ) method and converted it to int64.

If you check the variables again, then you can see the variables now have no missing values. So, our data is now ready for initial analysis.

Now, the data contains 227 observations and 9 variables (as we did not select the institute variable).

First, save the time variable in `T `and event/status variable in `E` that we will use during the model fitting process.

To start with survival analysis, the first step is to plot a survival curve of the overall data. It can be done by generating a Kaplan-Maier curve.

The Kaplan-Meier approach, also called the product-limit approach, is a popular approach which re-estimates the survival probability each time an event occurs. It is a non-parametric method, means it does not assume the distribution of the outcome variable (i.e., time).

We can generate the same plot without the 95% confidence interval using .survival_function_.plot() method.

We can also plot a failure curve. It is just opposite of survival, i.e., Failure/death probabilities over time.

The next step is to estimate the median survival time and 95% confidence intervals. This can be done using the .median_survival_time_ and median_survival_times( ). Here, the median survival time is 310 days, which indicates that 50% of the sample live 310 days and 50% dies within this time. The 95% CI lower limit is 284 days, while the upper limit is 361 days.

Using the KM estimate, we can check the difference between categorical groups. Though, it is only viable when the variable has fewer categories. Here is an example where we are plotting the two survival curves, one for Male and another for Female.

The plot generation steps are:

The curve illustrates that the survival probabilities of female patients are overall higher compared to male patients at any instance of time.

Similar to Gender/Sex, we can also plot separate survival curves for other categorical variables. Here, I have used a for loop that iterate over all ph.ecog categories and plot their survival function over a single plot.

We can further investigate the ph.ecog == 3 using value_counts( ) method. It shows that the category 3 has only one observation which does not contribute much if we fit a model.

Thus, we need to remove this observation from the data. We can achieve this using a filtering process as shown below. Now, the dataset contains 226 observations and 9 variables.

Let’s check the value count to reconfirm it. Now, it looks good, the 3rd category has been removed.

Cox-PH model is a semi-parametric model which solves the problem of incorporating covariates. In Cox’s proportional hazard model, the log-hazard is a linear function of the covariates and a population-level baseline hazard [2].

Definition of Hazard and Hazard Ratio

For fitting the Cox-PH model, we need to do some preprocessing of the categorical variables. Especially the dummy coding. The sex variable is binary, so we don’t have to dummy code it, until unless we want to alter the coding scheme, i.e., 0 for female and 1 for male. Here, we need to dummy code the ph.ecog variable only.

We can dummy code the ph.ecog variable using pandas pd.get_dummies( ) method. I have added the prefix identifier for the generated columns. Here, we will consider the ecog_0 as the base category, so in next step we will remove it.

Once dummy coding is done, we will concatenate the two columns, i.e., ecog_1 and ecog_2 column wise in our original dataset. Next, we need to drop the original categorical variable, i.e., ph.ecog using .drop( ) method.

The next step is to fit the Cox-PH model.

The model fitting steps are:

The interpretation of the model estimates will be like this:

Next we can plot the ranking of variables in terms of their log(HR) using the .plot( ) method.

We can use our fitted model to see how the survival changes as we change the covariate values. Here, I have used the plot_partial_effects_on_outcome( ) method to see how the survival varies for age group of 50, 60, 70 and 80 years old patents compared to their baseline function. It clearly highlights that young patents has higher survival probabilities at any given instance of time compared to old patients.

Once we fit the model, the next step is to verify the proportional hazard assumption. We can directly use the check_assumptions( ) method that return a log rank test statistics.

We can also use the proportional_hazard_test( ) method to perform the same.

The result revealed that at 5% significance level, only meal.cal violated the assumption. There are various approach to deal with it, for example we can convert it to a binned category, or we can use a parametric Cox-PH model.

If the proportional hazard assumption criteria of Cox-PH model is not satisfied, in such instance, a better approach is to use a parametric model. Accelerated Failure Time (AFT) is one of the popular parametric model used in survival analysis.

The model assumes that the survival function follows a parametric continuous distribution. For instance, one can assume a Weibull distribution or a Log-normal distribution.

The parametric AFT model assumes that survival function that derived from say two population (for example P and Q) are related by some acceleration factor lambda (λ), which can be modelled as a function of covariates.

Based on the covariates, the AFT model can accelerate or decelerate the failure times. The AFT model coefficients can be interpreted easily: a unit increase in a covariate means the average/median survival time changes by a factor of exp(b_i) [2].

There are many distributions exist that we can fit. So, the first step is to identify the best distribution that best fits the data. The common distributions are Weibull, Exponential, Log-Normal, Log-Logistic and Generalized Gamma.

Here is a step-by-step guide for identifying best fitted distribution:

Here, the Weibull provided the lowest AIC (2286.4) value thus, it can be selected as best fitted distribution for our AFT model.

The next step is to fit the Weibull Fitter class with the lung cancer data and print the summary. The model estimate provides coefficients, exp(coef) also known as Acceleration Factor/ Time Ratio, confidence intervals, z statistics and p-values.

The step-by-step interpretation of the AFT model is described below:

Next, we can plot the ranking of variables in terms of their log(accelerated failure rate) using the .plot( ) method.

We can use our fitted model to see how the survival changes as we change the covariate values. Here, I have used the plot_partial_effects_on_outcome( ) method to see how the survival varies among 50, 60, 70 and 80 years old patents compared to their baseline function. It clearly highlights that young patents has higher survival probabilities at any given instance of time compared to old patients.

Survival analysis is a powerful technique for conducting time to event analysis. I hope this article give you enough motivation to try it with your collected data.