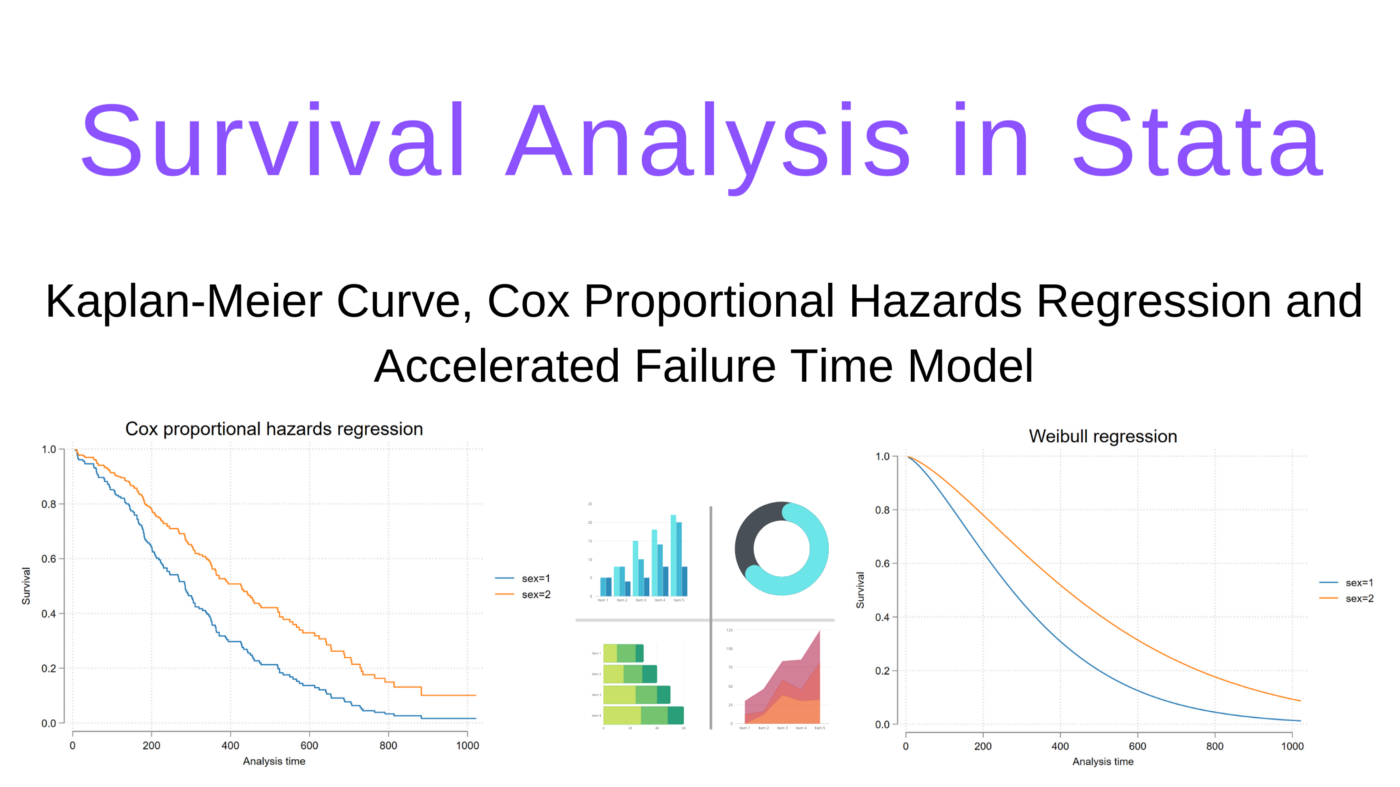 Survival analysis is a branch of statistics for analysing the expected duration of time until one or more events occur. The method is also known as duration analysis or duration modelling, time-to-event analysis, reliability analysis and event history analysis.

The survival analysis is used to analyse following questions:

The survival analysis is used in various field of research:

Aim of the Article

The aim of the article is to understand the survival of lung cancer patents using time to event analysis.

First, we need to know about the lung cancer data that we are going to use for the analysis. The data is originally available in R programming language (in survival library) [1]. So, I have downloaded it from R to use it for learning purpose. The data source is mentioned below.

The data consist of 228 observations and 10 variables/columns. The variable description is presented as follows:

First, let’s read the lung.csv data from our local storage.

The data contains 228 observations and 10 variables/columns.

The next step is to check the data description and data types using describe command. The variables in the dataset are either integer or byte type.

In the next step, we will add labels to the variables that helps us to recall the meaning of the coded variables. It is very helpful, if we need to visit the data in future.

To label a variable, we need to use label variable command then supply the column name and label string in quotation mark (‘‘ ’’). Now describe command displays the variable labels in the “variable label” column.

The next step will be to check for missing values in the variables. In Stata, we can use a user-defined library/package to count the missing values. The mdesc package can be installed by searching the package name. After installation, we can run the mdesc command, which creates a table for missing value counts and its proportion in separate columns.

The resulting table illustrates the following:

Let’s check the label count in ph.ecog categorical column. This variable has one missing value and the label count shows that label 3 has only one observation that we should remove from the model, as it won’t make much contribution to the model.

The next step is to remove the missing value and label 3 from ph_ecog variable. Additionally, I have imputed the ph_karno, pat_karno, meal_cal and wt_loss with their mean value using a for loop, as I don’t want to lose more sample and this analysis part is only for demonstration purpose.

If we now run the mdesc command, we can observe that there is no missing value in the variables. Only inst variable has 1 missing value, and we can keep it like that as we are not going to use this variable in our model.

The next step is to label values for the categorical variables using the following steps:

Here, we have labelled status, sex and ph_ecog categorical variables.

Now, the preprocessing of the data is complete, and we can save this data in Stata (.dta) format using save command.

Next, we can directly import the “Survival analysis of lung data stata.dta” file directly using the use command. Now, everything looks good, so we can proceed with the analysis.

Declaring Data to be Survival-Time Data

Before we proceed with the survival analysis models, we need to declare the time and failure event (status) variables using stset command.

To start with survival analysis, the first step is to plot a survival curve of the overall data. It can be done by generating a Kaplan-Maier curve.

The Kaplan-Meier approach, also called the product-limit approach, is a popular approach which re-estimates the survival probability each time an event occurs. It is a non-parametric method, means it does not assume the distribution of the outcome variable (i.e., time).

We can use the sts graph command to generate a K-M plot. We can also supply the risktable command that generates a risk table underneath the plot.

Using the K-M estimate, we can check the difference between categorical groups. Though, it is only viable when the variable has fewer categories. Here is an example where we are plotting the two survival curves, one for Male and another for Female.

The command is the same only we need to add a by(sex) option, which split the data by gender, i.e., Male and Female and generate two separate K-M plots.

The curve illustrates that the survival probabilities of female patients are overall higher compared to male patients at any instance of time.

Cox-PH model is a semi-parametric model which solves the problem of incorporating covariates. In Cox’s proportional hazard model, the log-hazard is a linear function of the covariates and a population-level baseline hazard [2].

Definition of Hazard and Hazard Ratio

To fit the Cox Proportional Hazard model, we need to use the stcox command and then supply the independent variables. The categorical columns were added with their base value indicator [ib(category)]. I have added the allbaselevels option to print the base labels in the summary table.

Note: To display the coefficients instead of hazard ratios, we need to add nohr option in the command.

If we do not supply the nohr option, then it will print the same table but with a hazard ratio column.

The interpretation of the model estimates will be like this:

Concordance index or C-index is used to evaluate the model predictions. It ranges from 0.5 to 1. The C-index of 0.5 indicates a poor performing model, while a value of 1 indicates a model with perfect prediction. We can estimate C-index using the estat concordance command. The estimate table shows that the Harrell’s C value is around 0.65.

Next, we could check the fitted model’s overall survival, hazard, and failure over time using different plots.

The first plot and most basic one is generating survival plot of the Cox-PH model using stcurve, survival command.

Instead of survival, if we supply the hazard in the option, it will generate a hazard curve.

We can generate a cumulative hazard curve by supplying the cumhaz in the command option.

To generate a failure plot (opposite of survival plot) you need to supply the failure argument.

Once we fit the model, the next step is to verify the proportional hazard assumption.

We can directly use the estat phtest command and also supply the detail command to generate test statistics table.

The result revealed that at 5% significance level, ph_karno and meal_cal violated the assumption. The global p-value also indicates that the assumption is violated. There are various approach to deal with it, for example we can convert meal_cal to a binned category, or we can use a parametric Cox-PH model.

If we check the log-log plot for ph_ecog we can see that the lines crossed each other which implies violation of the assumption.

If the proportional hazard assumption criteria of Cox-PH model is not satisfied, in such instance, a better approach is to use a parametric model. Accelerated Failure Time (AFT) is one of the popular parametric model used in survival analysis.

The model assumes that the survival function follows a parametric continuous distribution. For instance, one can assume a Weibull distribution or a Log-normal distribution.

The parametric AFT model assumes that survival function that derived from say two population (for example P and Q) are related by some acceleration factor lambda (λ), which can be modelled as a function of covariates.

Based on the covariates, the AFT model can accelerate or decelerate the failure times. The AFT model coefficients can be interpreted easily: a unit increase in a covariate means the average/median survival time changes by a factor of exp(b_i) [2].

There are many distributions exist that we can fit. So, the first step is to identify the best distribution that best fits the data. The common distributions are Weibull, Exponential, Log-Normal, Log-Logistic and Generalized Gamma.

Here is a step-by-step guide for identifying best fitted distribution:

We can refit the model with Weibull distribution and generate a model summary table for interpretation.

For interpretation of model coefficients, we need the acceleration factors or time ratios. To obtain the time ratio column, we need to specify the tratio option.

The step-by-step interpretation of the AFT model is described below:

Next, we could check the fitted model’s overall survival and hazard over time using different plots.

The first step is to generate a survival plot of the fitted Weibull AFT model using stcurve, survival command. Now the survival function is smooth as it follows Weibull distribution.

Instead of survival, if we supply the hazard in the option, it will generate a hazard curve.

We can generate a cumulative hazard curve by supplying the cumhaz in the command option.

Survival analysis is a powerful technique for conducting time to event analysis. I hope this article give you enough motivation to try it with your collected data.

Acknowledgement: I would like to thank Clyde Schechter for helping me with the distribution selection code. 👏👏

How to use Stata and Python Together Directly from Jupyter Notebook »